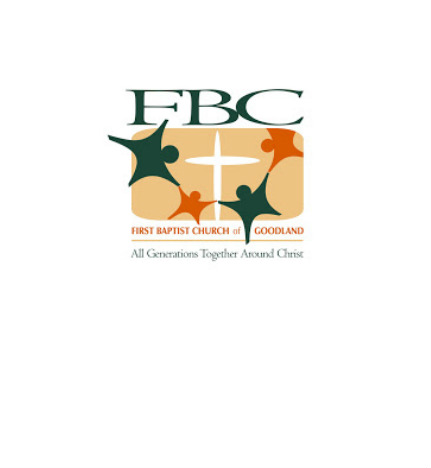 During the summer of 1947, the Holy Spirit led S.B. Crawford, H.L. Gordon, and D.C. Springer to found the First Baptist Church in Goodland. The dedication and personal sacrifice of these three families was a major contribution to the church that we worship in today. In the spring of 1948, the church progressed from meeting in the Crawford home to a small basement church. Next, an old schoolhouse was purchased and placed on the basement foundation. In 1954, the church broke ground on a new building at 425 Center Street in Goodland. Then in 1962, a parsonage was purchased across the alley (east) from the church. There are no original members left today; however, the church has a number of members who have been active for many years.

In the late '90's, the congregation considered an expansion and remodeling of the church. As time progressed, it became evident that remodeling the old building was not in the best interest of the church. In 2004, the decision was made to sell the parsonage and begin the search for a new church facility. The Lord opened the doors for an opportunity to move to 1121 Main Street in December of 2005, when we purchased the old ALCO building on the corner of 12th and Main. This was a step of faith, as this new facility would not be the traditional church setting to which we were accustomed, but it would provide us with great opportunity to witness in the downtown area. The congregation began renovating the building to convert it into a church with a storefront. During renovation, we continued to worship in the old church until 2006, when we accepted an offer to sell the building. We closed on the building and our last service in the old chuch was February 24, 2007. It was an emotional day, cast with both sadness and excitement. Because our new facility was not yet completed, we held services at Bateman's Funeral Home. We finished the new building and held our first service in our present location of 1112 Main Street on February 2,2009.

In September 2003, the congregation celebrated a Homecoming for it's 55th anniversary. Many past members returned to participate in this event, and a time capsule was buried in the church lawn and marked with a plaque. It was moved to the new church for the future opening planned in 2025. The church has experienced two periods of growth in its recent history. In the 1980's under the pastoral leadership of first Steve Speichinger and then Greg Hubbard, the church expanded greatly and had a very active AWANAs program. More recently under the pastoral leadership of Travis Blake our church again experienced growth, especially young families.

Then in late January of 2014, First Baptist recieved Rich Blanchette as their new pastor. Pastor Rich taught by example. He was a servant leader and loved people with the love of Christ. During his time here there was an active Youth For Truth program and a strong Middle and High School Youth Group. A Food Pantry was also started and with it came great opportunities to share Jesus with many outside the church. Pastor Rich was called from Goodland to serve as an Air Force Chaplin in Los Angeles, CA in June of 2017. He is greatly missed. We are prayerfully seeking a new Pastor at this time.

The following five pastors have been installed at the church since 1988:

Greg's primary strength and focus was church growth, equipping the saints, and a vision for the future of the church.

David's passion was for the word, and he excelled at teaching. He stressed Bible Study and was a devoted family man.

Bud's gift was that of a shepherd, as he loved people and demonstrated community witness and social skills. He retired in 2003 at the age of 78.

Travis' strengths were in his inclusiveness, his vision and ideas for the church. He was very caring with new people. He promoted being the hands and feet of Jesus within the community.